„The late historian, Professor Walter Rodney, spent 361 pages of well researched writing in 1972 trying to convince the entire world how Europe underdeveloped Africa. The book was a masterpiece, one of the best literatures on European imperialism, especially as it relates to Africa. Rodney was very much right in his views, as he based his analysis on the prevailing events of immediate post-colonial African independence period of the late 1960s and early 1970s.
It is 42 years after the book, ‚How Europe Underdeveloped Africa‘, was published. This is almost half a century yet Africa is still in search of development. This time around, we truly know who are under developing Africa; certainly not the Europeans.
Had Rodney not being assassinated in 1980, perhaps he would have lived to develop a different viewpoint about the underdevelopment of Africa. Probably, he would have written a new book with the title: ‚How Africans Underdeveloped Africa‘.
Between 1950 and 2010, the world witnessed some of the greatest transformations ever to have happened to this place called earth. However, Africa is not going along with the world and we should have no one to blame but ourselves. In the world of today, it is every man for himself; no one can develop you, no matter how much he wants to, if you don’t want to develop yourself.
We must tell ourselves the bitter truth that what happened in the past belonged to the past, and those who are still thinking of the past are wasting the present and would therefore, have no future. Currently, Africans are the cause of Africa’s underdevelopment. Slave trade and colonialism are things of the past and they did not occur only in Africa. They happened in Latin America, North America, Asia and other parts of the world. Can we compare those regions with Africa today? Are countries like India, Malaysia, Mexico, Brazil, Singapore and the likes, still blaming the Europeans for their past misfortune or have they transformed into powerful economics and political blocs? Brazil is now the 7th largest economy of the world, 37 places above their former colonial masters, Portugal.
In the history of the world, every civilization as well as every country has had their ups and downs. Europe bounced back from World War I and II, the USA bounced back from civil war and racism, Asia and Latin America bounced back from colonialism, dictatorships and political turmoil, why will Africa not bounce back from slave trade and colonialism?
At present, it is obvious, that Africa is the least developed inhabited continent of the world. The region suffers from all sorts of problems, 90 per cent of which are man-made. Naturally, the region seems to be the luckiest, because it is one of the most geographically stable continents with least occurrences of natural disasters like earth quakes, volcanic eruptions, hurricanes, tornados, acid rain and the likes. Most parts of the region don’t have unbearable weather lie the extremely cold polar regions or extremely hot Arabian regions. This is in addition to the abundance of mineral and other natural resources. Africa is the global chief source of raw materials because rather than process and manufacture its raw materials, it exports them for others to process and resell finished products to them at exorbitant prices. Nearly 10 per cent of the world’s known oil reserves are in Africa but, all for nothing.
The most prominent problem of Africa is leadership failure. Most past and present African leaders have failed the region woefully and their brutal sit-tight phenomena have made it very difficult or impossible for them to be replaced. More than 85 per cent of African elections are not free, fair and credible. Only Ghana, Senegal, South Africa and some few other countries can boast of relatively free and fair elections. Until very recently, elections were not even conducted at all in almost the entire North Africa. African leaders steal public funds in millions and billions of dollars and invest same in European economies. How many leaders in other continents steal public funds and invest in Africa?
Africa is the land of hate. Hardly, could you find an African country that is completely devoid of ethno-religious crisis. Every year, thousands of lives and properties are wasted in the name of religious and ethnic differences. Just 20 years ago in Rwanda, more than 800,000 people were estimated to have been killed just because they belong to a particular ethnic group. Currently in Central African Republic, people are being massacred in their hundreds because of their religious faiths.
When we look at the very few African countries claiming to be recording progress in economic growth, we find our that their people are in deep suffering, as if increase in national economic growth is directly proportional to increase in poverty and suffering. What these African nations are having is development in irony, a development that increases the suffering off the people, makes the poor poorer and the rich richer.
But Africa still has a chance to develop. All the potential for greatness are there. What are lacking are the will and the determination. Let all Africans put their hands on deck to pull out the region of the this mess and place it in the global development map by the year 2030.“ 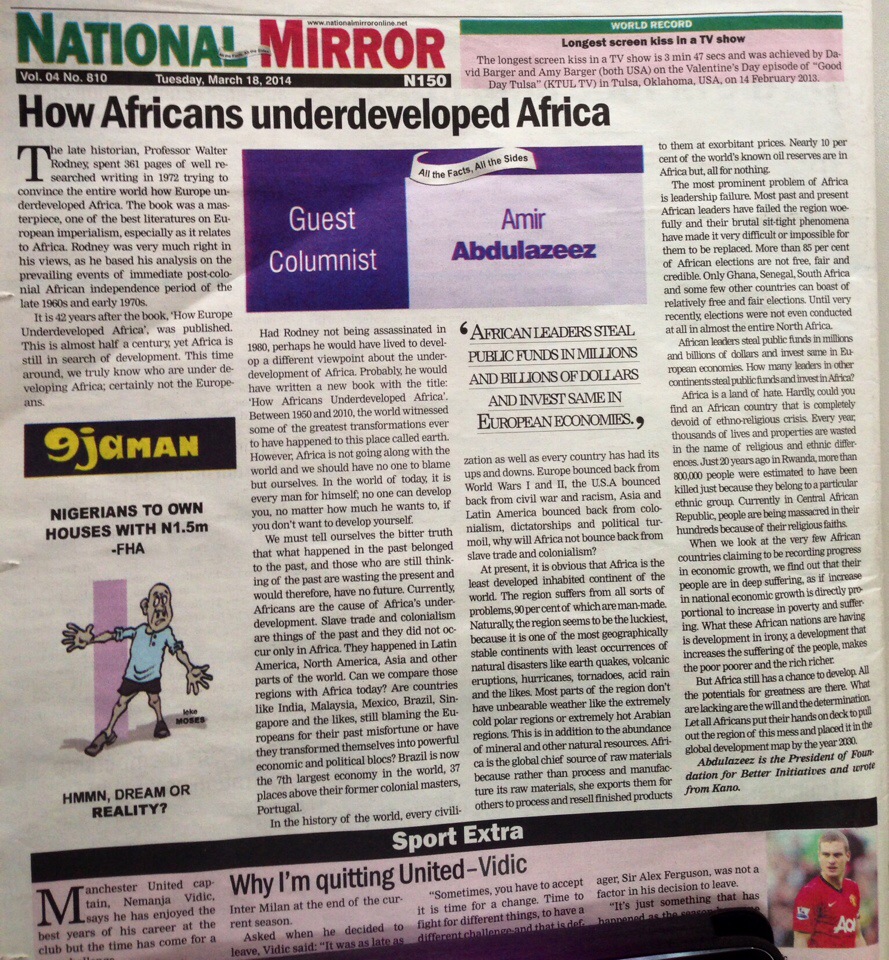